The reconstruction of a section of one the main freight berths at St Peter Port Harbour is nearing completion.

The work is part of the £13.75 million refurbishment of the harbour's freight handling facilities. The project, which is expected to take two years, includes the replacement of four of the five current cranes with two new mobile units. Before these can be installed, extensive work is required on the berths they will be located on.

As well as being used to load and offload goods, the berths provide the harbour's main freight container storage yard.

The upper deck of one of the berths, where two of the existing cranes are, was demolished during the summer and a new section is being constructed. 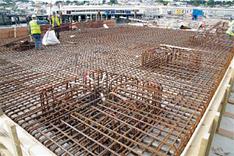 New steel-lined, reinforced concrete piles have been installed, to support the new structure and provide the required load bearing strength for the mobile cranes. That operation involved drilling through the existing jetty into the bedrock beneath the berth.

The steel reinforcement on the first section of the replacement deck was recently completed, and concrete has now been poured over this. The final section will be complete this week, after which the new concrete will be left for several weeks before it achieves its final strength.

Early next year the manufacturer of the new cranes will start to dismantle the two existing ones currently located on this berth, before delivering the first of the replacements.

"Everything is progressing according to plan. At the operational level maintaining essential harbour activities while large sections of the existing facilities are effectively out of commission presents a number of challenges. However from a technical perspective, we have not encountered any major problems".

The project also involves repairs on the other two freight berths, where corrosion has occurred to their undersides, supporting beams and columns. The refurbished structures will then have a design life of at least 50 years.

Currently, the cranes handle more than 50,000 tonnes of freight a year, and are all at least 40 years old. Two of the units being replaced date back to 1965, and the new ones will be designed to last at least 25 years.